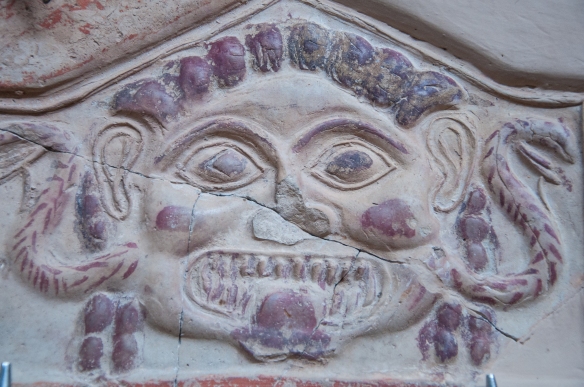 The Archaeological Museum is well camouflaged and set well away from the main site. It’s a modern building and like most Greek museums mercifully air-conditioned.

The museum has a lot of interesting material; surprising when you consider that the site was looted several times. There are unusual collections of tripods (donations to the temples); warriors’ helmets through the ages, remarkably well-preserved; and some enormous discs that used to sit atop the columns in the Temple of Hera.

However, the highlight of the museum has to be the statuary. The Nike by Paionios stood originally in front of the Temple of Zeus. In Greek mythology, Nike was the goddess who personified victory. Sculpted from highly prized Parian marble it is 3 metres tall and stood on a triangular plinth which was 10-12 meteres high, so from  its height alone it must have made a huge impact at the time. 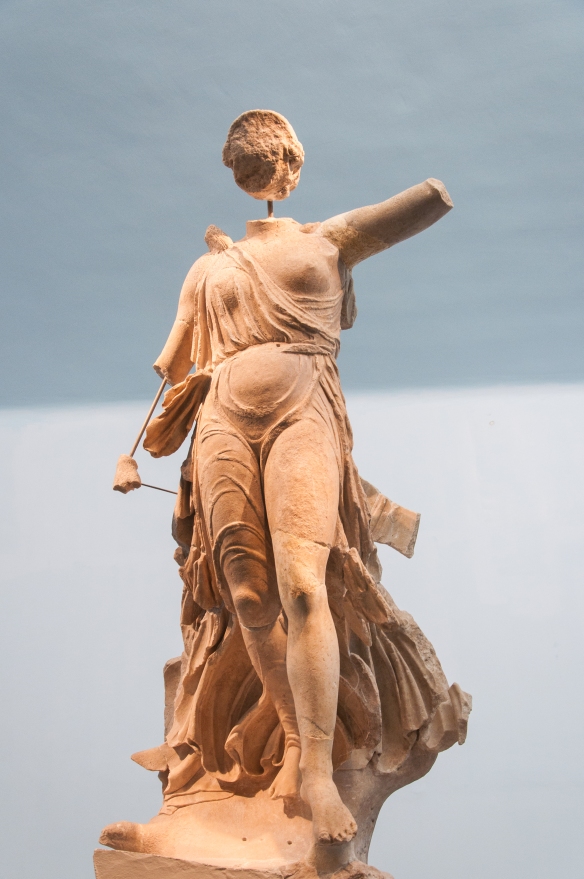 She would have carried a palm branch in her right hand and an olive wreath in her left to crown the victor. As you walk around it you get an amazing sense of the figure alighting on the ground after her flight from Mt Olympos and this is emphasised by the way that her dress (himaton) is pressed tight against her body by the air pressure and by the way she stands balanced on her left foot whilst the right foot is still in the air.

Nike of Paionios – right side

The strange looking animal head at the bottom of the sculpture is an eagle – another symbol of victory. 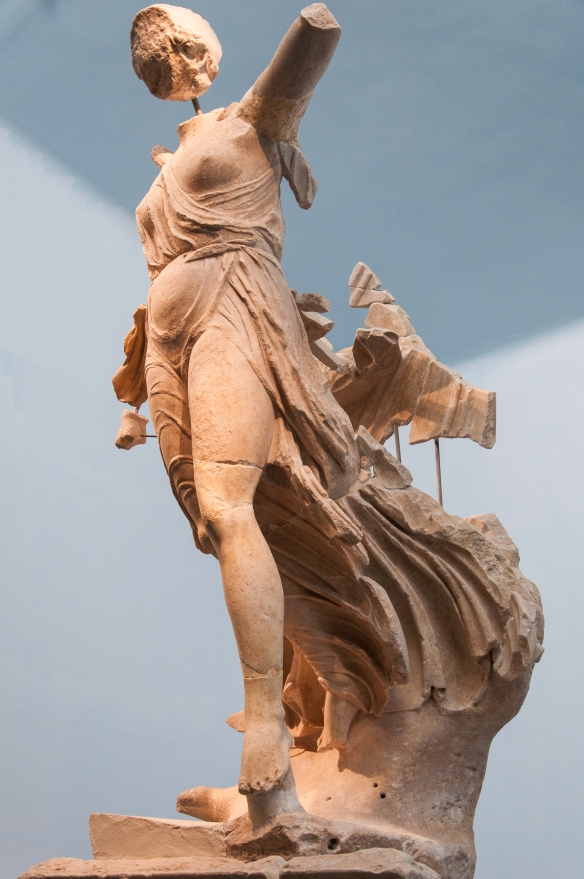 Nike of Paionios – left side

The statue was commissioned by the Messenians and Naupaktians as a votive offering to Zeus for victory in battle, probably during the Peloponnesian War. Interestingly this image was depicted on medals awarded at the 2004 Athens Olympics and at the London Olympics in 2012.

Then there are the statues which decorated the two pediments of the Temple of Zeus. The first, a commonplace of Greek narrative architecture, is the battle between the Lapiths and the Centaurs which dramatises the struggle (and ultimate victory) of reason and civilisation over barbarism. 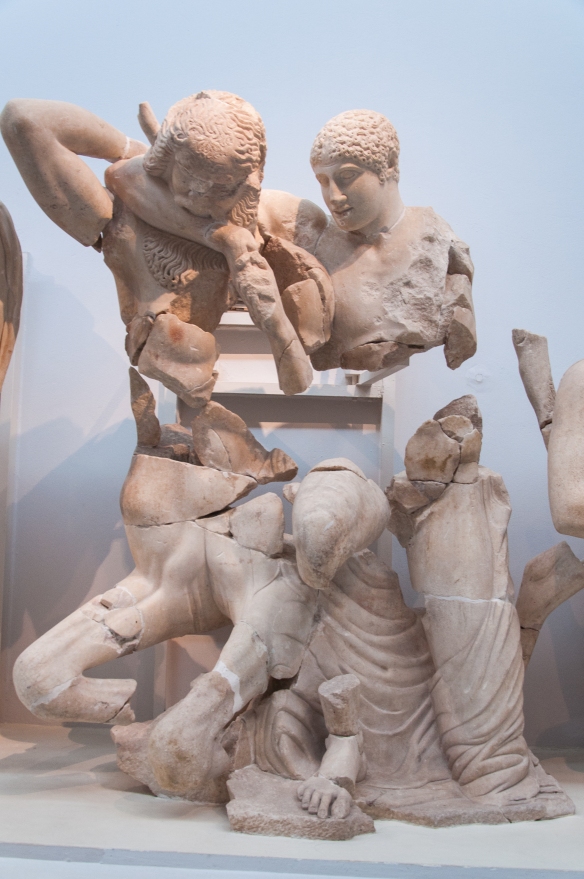 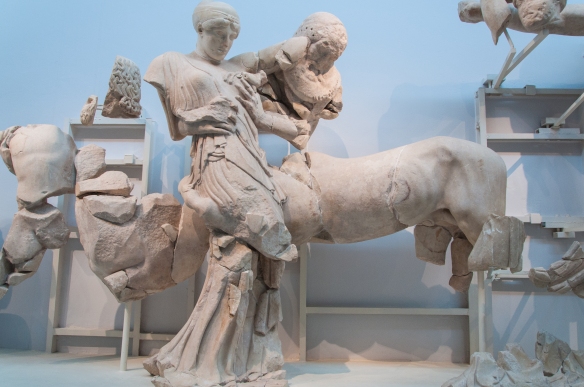 In the middle of the pediment stands Apollo, depicting the triumph of reason and civilisation. 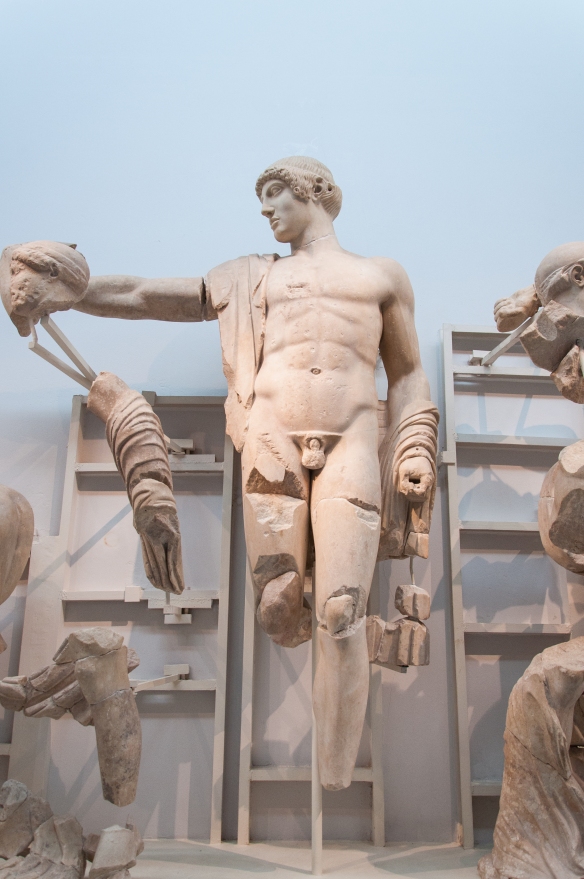 Battle between the Lapiths and Centaurs – Apollo

The second pediment depicts another myth, the chariot race between King Oinamaos of Pisa and Pelops. Oinomaos was terrified by a prophecy that he would be killed by his son-in-law. So to make things difficult any suitor for his daughter, Ippodameia, had to race against the king in a chariot race and when they lost, the king had them killed. Pelops wanted to marry Ippodamia and, with the help of Poseidon, replaced the axle of Oinomaos’s chariot with wax. As Oinomaos’s chariot caught up with Pelops, the chariot flew apart and Oinomaos was killed as his horses dragged him to death. Oinomaos’s charioteer, Myrtilos, managed to survive and cursed Pelops as he had him thrown off a cliff into the sea: this was the curse on the line of Pelops that was a motor force behind the great Greek tragedies of the classical era.

Compared to the way that the human figures are depicted the horses strike me as rather clunky, poorly observed and a bit comic.

Chariot race between Pelops and Oinomaos 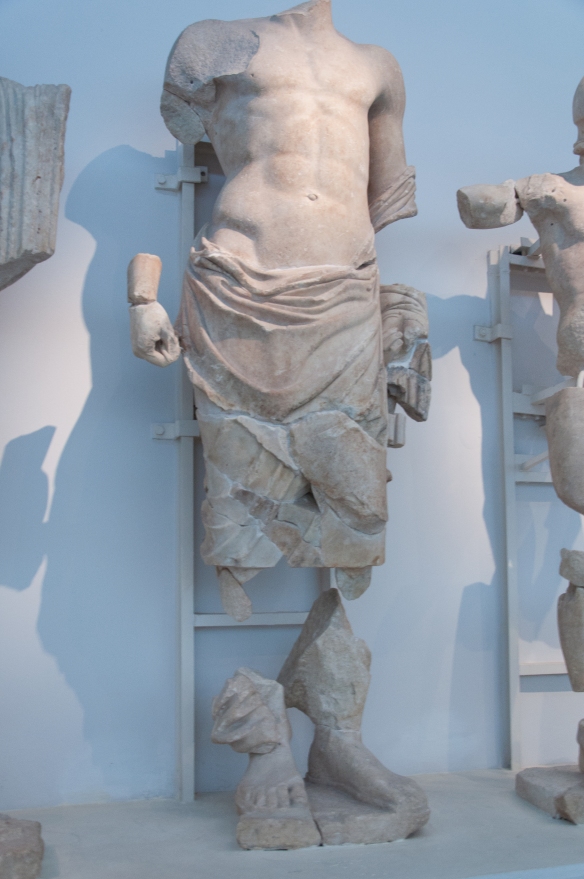 Chariot race between Pelops and Oinomaos

The most outstanding item in the museum is the Hermes by Praxiteles, sculpted in the 4th century BC out of Parian marble, which was found in the Temple of Hera during the 1877 century excavations. The sculpture depicts the god Hermes leaning against a tree trunk holding the infant Dionysus. The story is that Dionysus’s mortal mother was incinerated when her lover Zeus appeared to her in his full divinity. Zeus however managed to save Dionysus by sewing him into his own thigh until it was time for him to be born. Zeus instructed Hermes, the messenger god, to take the infant Dionysus to Crete to be brought up by nymphs, away from the anger of Zeus’s wife, Hera. The status shows Hermes with the infant before taking him to Crete.

It is probable that Hermes was holding something out in his right hand (a bunch of grapes?) that the infant is reaching out to touch. Hermes’s body is shown in a relaxed ‘S shape. I think the musculature of the legs and difference in the way that the knees are depicted are remarkable. 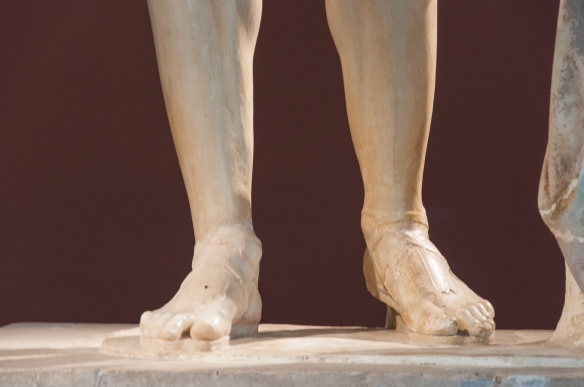 It is said to be one of the best preserved Greek classical sculptures and how Praxiteles achieved such a high polish on the marble is a wonder. Unusually, the back of the sculpture is unfinished, as it is still rough and you can still see the chisel marks. 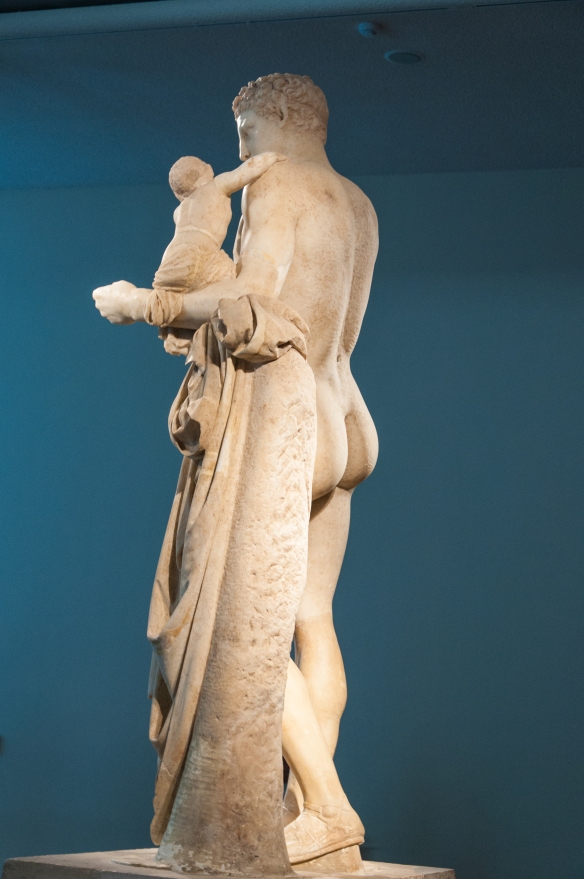 However it is the face of Hermes that is the most magnetic element of the sculpture and it is noticeable that this changes as you walk around it. From the front the god looks serene: 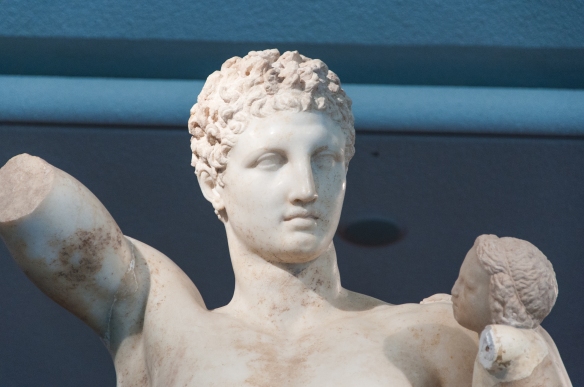 However, from the right side it appears that the god is sad:

On the left hand side though the Gods face looks as if he is smiling.

I also like the way the sculptor has depicted the chubby baby Dionysus and how he looks playfully up at Hermes.