One evening a few years ago we were having dinner with a friend in a tiny village in northern Belarus, not far from the border with Lithuania. Our visit was in connection with setting up community development projects that we might work on together and our conversation ranged widely. Towards the end of the evening I asked our host, an educated man with liberal values and a practising Catholic if he knew anything about znakhari (healers, though my dictionary translates it as ‘sorcerers’) in the local villages.

He then gave me an example from his experience of a znakhar curing a horse that appeared to be sickening and close to death due to some unidentified ailment. I would have liked to find out much more about what they did and actually meet one but, as is often the way, the conversation moved on and the following day we had to leave.

I was prompted to ask the question from reading a fascinating book called Solovyovo – the story of memory in a Russian village by an American anthropologist called Margaret Paxson. She lived with a family in a village some 300 miles north of Moscow to study their lives and particularly their attitudes to time, memory, beliefs and rituals.

One of the people she writes about is a healer called Mikhail Alekseevich Belov who learnt his skills from his father, who in turn had learnt them from a nun. People came from all around to seek his help with everything from cancer and alcoholism to family problems and hauntings. His method of treatment was to have a conversation with the person seeking a cure to find out what their problem was. He would then fill a bottle with ordinary water and, beneath the icons in the icon corner of the bedroom, whisper prayers over the water and then give it to the person seeking a cure to take away and drink.

Ms Paxson explains that Mikhail Alekseevich is an example of what are called in Russian those who know (tye, kto znayet). In other words, people who through a form of sorcery use incantations, prayers and spells to effect cures. This is quite different from a znakhar who uses food, plants and herbs to cure people.

It is interesting that these folk beliefs still exist (the book was published only in 2005) alongside, and often in harmony with, more recent Orthodox beliefs and practices.

She also records the belief in the evil eye (sglaz) which she puts down to envy of improved social or personal circumstances.

Of course, belief in the evil eye is prevalent in Greece too, as you can see from the number and variety of blue eye talismans throughout the country. When I first came across it, in my ignorance I thought it went back to the time of the Frankish occupation after the Fourth Crusade when the country was overrun by fair-haired and blue-eyed northern Europeans. How much more unlucky can you get than to be invaded? But the belief is certainly much older than that and goes back to at least Ancient Greece.

In my first Greek class, I remember one of my fellow pupils recalling an incident when she was staying in Greece. She did not feel particularly well, but couldn’t work out what was wrong. The friends she was staying with suggested that they do the test for the evil eye (kako mati) to find out whether she was a victim of it. The test involved putting a drop of olive oil in a glass of water: normally it should float, but if it sinks this indicates that the eye has been cast. In her instance, it sank. So her concerned friends took her off to the Sunday liturgy to see the priest after the service. He asked her some questions, said some prayers over her and suddenly, as she described it she ‘felt something leave her’. She was soon back to her old self.

The Orthodox Church recognises the evil eye (which it calls vaskania) as ‘simply a phenomenon that was accepted by primitive people as fact. They believed that certain people have such powerful feelings of jealousy and envy, that when they looked on some beautiful object or individual it brought destruction. Vaskania is recognized by the Church as the jealousy and envy of some people for things they do not possess, such as beauty, youth, courage or any other blessing…The prayers of the Church to avert the evil eye are, however, a silent recognition of this phenomenon as a morbid feeling of envy.’

It even has a specific prayer for its removal:

Let us pray to the Lord…Lord have mercy… we pray you and beseech you: Remove, drive away and banish every diabolical activity, every satanic attack and every plot, evil curiosity and injury, and the evil eye of mischievous and wicked men from your servant (Name); and whether it was brought about by beauty, or bravery, or happiness, or jealousy and envy, or evil eye, do you yourself, O Lord who love mankind, stretch out your mighty hand and your powerful and lofty arm, look down on this your creature and watch over him(her), and send him(her) an angel of peace, a mighty guardian of soul and body, who will rebuke and banish from him (her) every wicked intention, every spell and evil eye of destructive and envious men; so that, guarded by your, your supplicant may sing to you with thanksgiving …

Yes, Lord, our God, spare your creature and save your servant (Name) from every injury and brought about by the evil eye, and keep him (her) safe above every ill. For your are our King and all things are possible to Thee, O Lord. Therefore, we ascribe glory to the Father, and to the Son and to the Holy Spirit, now and ever and unto the ages of ages. Amen.

Living in a Protestant northern European country imbued with Enlightenment ideas of rationalism and the dismissal of the supernatural, it’s easy to look down on such beliefs. But you only need to scratch the surface to find that similar superstitions were part of everyday country life until comparatively recently.

My father was brought up in a little village in Shropshire in the 1910s and 1920s and I remember him telling me that there was an old lady in the village who among other things was able to cure warts. The ‘cure’ consisted of rubbing the wart with a piece of raw meat, reciting the Lord’s Prayer backwards three times over it and then burying the meat in the ground.

My parents were full of old superstitions and it has taken me years to be able to rid myself of them: don’t walk under ladders; don’t cut your nails on a Friday; if you spill salt throw some over your left shoulder to get rid of the devil; if you break a mirror, it’s 13 years bad luck. I’ve done quite well, but the salt thing I still used to do until about 10 years ago. As for mirrors, I’ve never quite got past my fear of that one…

Some more shots from my landscape workshop on the Quantocks with the superb Stephen Spraggon: 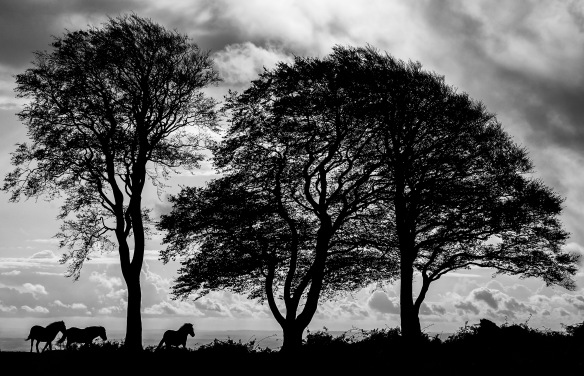