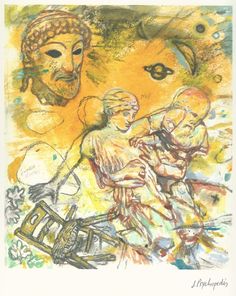 This poem is from a collection by Ritsos called The wall inside the mirror and it was written in the village of Partheni on the Dodecanese island of Leros where he was being held in an internment camp by the Greek Junta. The date of its composition, 13 December 1967, also happens to be a very significant one in the history of the Junta.

On that day King Constantine attempted to stage a counter coup against the Colonels’ regime. He and his family flew to Kavala, east of Thessaloniki to try to rally loyal troops against the regime and then to take Thessaloniki. But the attempt was foiled by officers and troops loyal to the Junta and Constantine was forced to leave Greece and take refuge in Rome. He never returned and the monarchy was eventually abolished in 1973.

We walked up on the hill to see our country –
humble dwellings, modest fields, stones, olive trees.
Vineyards stretch down to the sea.
Next to the plough a little fire is smoking. From the old man’s clothes
we made a scarecrow to keep off the jackdaws. Our days
take their course with a little bit of bread and a lot of sun.
Beneath the poplars a straw hat is gleaming.
The cock on the gate. The cow on the yellow earth.
How did it happen that with a stone hand we dealt with
our home and our life? On the lintel
is the soot, year after year, from the Easter candles –
little black crosses that the dead traced
when they came back from the Easter Day service.
This place is much loved, with patience and pride.
Every night from the dry well the statues cautiously come out
and climb into the trees.

This poem haunts me a lot. It depicts an ordinary countryside scene, such as you could find all over Greece. A familiar and much loved land in all its ordinary detail. A land with a deep history and familiar, comforting traditions, like tracing the sign of the cross over the lintel at Easter. But at the same time there is all this unbelievable stuff going on: the poet is in exile, the country is in the vice-like grip of a dictatorship, the king has just tried to seize power back. How on earth did we get here?

I think this poem speaks to me so clearly because it expresses how I feel about the state of our own country at the moment. How the hell did we get here? It’s not a comfortable place to be, in the same way that being held in an internment camp wasn’t for Ritsos.

But strangely there is something comforting about the extraordinary image at the end of the poem. Though the source of life, the well, is dry at the moment, the country still has a deep connection with the past that the nightmare present cannot eradicate. Nothing can destroy that link with Greece’s history, culture and values. Even though the statues only come out at night and then ‘cautiously’, they are still there. We can only guess what they are thinking about Ritsos’s Greece and what our equivalents would think about our own situation. But at least those fundamental values haven’t been lost – and that’s worth hanging on to in these dark days.

Wandering around the back streets of Irakleio at the end of a two week holiday in Crete back in 2016, we came across a strange sight. On the edge of a dusty square, dominated by a church a young man in black clothes was being lynched in a mulberry tree. Or rather he was standing on a step-ladder whilst a roadie fixed up the harness that would support him when he was eventually hanged. We had come across the shooting of a scene from a film or TV programme that looked as it was set in the nineteenth century when Crete was under Ottoman rule.

Various other characters were waiting around in the square for their bit of the scene:

We found seats at a local cafe to watch them shoot the scene, but they were still setting up when we left three-quarters of an hour later, without a clapboard being clapped.

About a year later, I found a You tube clip of a scene that featured the characters and setting we had seen in that square in Irakleio. It was from Giannis Smaragdis’s film Kazantzakis that was released in November 2017. I’m looking forward to seeing the whole thing when I can find a copy of it.

This shot was taken in the countryside near the village of Vamos (Crete) looking towards the White Mountains.

A few shots of peeling paint, rust and contrasting colours from a recent trip to Crete.

Centuries old plane tree in the centre of the village of Helicarnasos, Crete

With so many leaves the sun waves ‘good morning’ to you
with so many pennons the sky shines on and on
for those amongst the weapons and those in the earth.

Keep quiet, the bells will ring in a while.

Under the earth, in their crucified hands,
they hold the bell rope,
they are waiting for the time, they are waiting to sound the resurrection
this earth is theirs and ours
no one can take it from us.

Keep quiet, the bells will ring in a while.

By the dry pool where kings and ambassadors come
to purify and prepare themselves for the god,
looking for guidance, hoping for confirmation
of a decision already made in the depths of the heart;
I dip my hand in the cool water of the nearby spring
honing my own question for the priestess-seer.

The climb up the Sacred Way zigzags through an empty museum,
looted of its treasures long ago and dozing in the sun:
a journey to prepare the seeker in mind and body
for that brief encounter with the divine
in a remote valley at the middle of the world.

In this fierce light and relentless heat Apollo
tests our resolve, step by shadeless step,
until at last we come to the huge altar
drenched in the blood of vain sacrifices,
the smoke of burning animal fat and bones
rising in a sightless sky to the ritual cries of the women.

Six columns of the temple still stand, looking over the sacred valley.
How did they feel as they stood here looking at this scene,
awaiting their turn? What fears? What hopes? What expectations?
The priest leads me inside in my turn
to the dark rock cleft where an old woman sits
on a gold tripod, wreathed in sacred juniper fumes.

I ask my question to the midday silence. Apollo,
voiceless now without his Pythian interpreter,
stares intensely with his single eye
as if to burn an answer in my brain.
Serene and calm, he gazes beyond the world.
The silence is not broken: the search never ceases.