A few shots of autumn colours taken in one of my favourite local woods. Nothing spectacular, just playing with what can be done using my tripod.

As the light went fast I came across this pool:

The museum at Iviron is the pride and joy of Fr Prodromos and his pet project. He has been collecting material for it from all over the monastery and the surrounding area for years and now he has been able to house it all in a large, brightly lit basement area within the precincts. There’s no labelling of the items on display, but they are grouped by topic (eg kitchenware, wine and oil containers, keys, tools, etc.).

For example here’s part of the section devoted to baking, with wooden dough moulds and peels for putting loaves into a wood fired oven:

The cylindrical containers on rods in the picture below are for roasting coffee beans:

I was amazed to find a whole section devoted to rifles, guns and knives. This is an interesting reminder of the fact that Athos has frequently been attacked in the past by marauding pirates seeking to loot the monastery treasures. That’s why so many of the monasteries are built like fortresses with high walls, no easily accessible windows and heavily re-inforced doors. For example, the main door of the monastery of Dionysou (next on my little pilgrimage) is one of the thickest doors I have ever seen.

Here is a picture of monastery guards on Athos (not Iviron) taken as recently as 1913. They’re almost certainly not monks, but in earlier centuries they probably would have been. 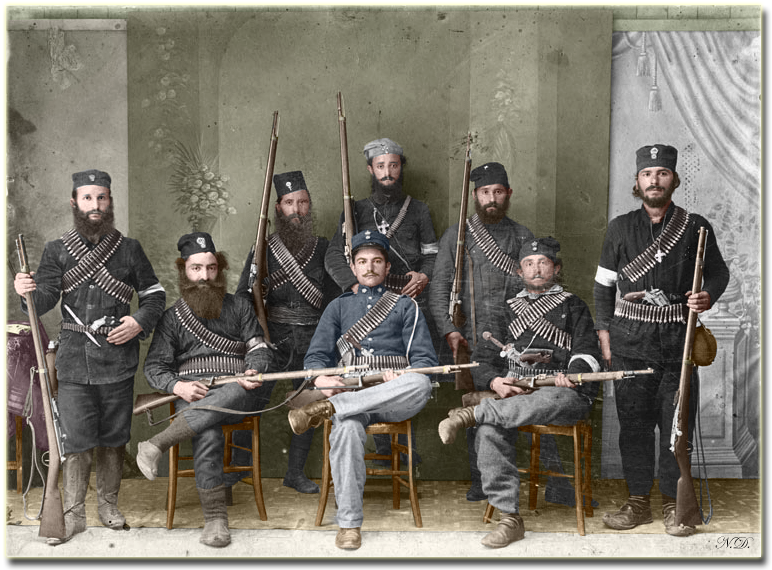 This window sill contains a whole pharmacy of medicine bottles. At first I thought the bell shaped glasses at the front were leech glasses, but now I think they are ventouse glasses which were used as a vacuum device for delivering babies or more likely for ‘cupping’. This technique was a folk remedy for dealing with chest colds and fevers.

The technique is well captured by Sydney Marangou-White (who was born in the village of Ouranoupoli on the border with the Holy Mountain) in this description of her mother, the village healer in the 1930s:

“Mamma stood on the left by a shelf. On it was her equipment, comprising a fork, cotton wool, a reel with sewing thread, a small glass, a box of matches and a bottle of blue liquid. She picked up the fork, wound the wad of cotton wool round the prongs, securing it with a piece of thread. She opened the bottle containing the blue liquid – methylated spirit. she poured some into the small glass and plunged the fork in it, head first…

Mamma removed the intoxicated fork from its alcoholic soak, struck a match and set the wad alight, making it look like a flaming torch. With her right hand she picked up a cup (ventouse), inserted the flaming torch into it to create a vacuum, and placed it adroitly on the patient’s back. Three more are applied to make a square…

The patient whimpers, begging Mamma to remove them. They are left in place only for a few minutes, but to the patient it seems a very long time.”

Bells of all shapes and sizes;

And a huge variety of locks and keys:

Coming more up to date there were even some old radio sets, phones and mechanical typewriters. The final part of the museum features a small collection of agricultural equipment, including ploughs, harrows, rakes and carts:

and some threshing boards:

In the book quoted above, Sydney Marangou-White includes a description of how these items were used on the threshing floor:

“…a circle was marked out on the hard ground with a stone. It was swept and received about four rows of sheaves. These were placed in a concentric manner, starting from the central point with heads down, and placed in an ever-increasing circle, until the marked area was reached…

The thresher…was a rectangular wooden platform, measuring about a metre by three metres, the front bent at an angle. It had big metal rings for attaching the donkey’s harness. The under surface of the platform was punctuated in horizontal lines with shards of flint. The thresher would be turned over on the sheaves at the edge of the circle; the donkey, head in the nosebag munching happily, was led to its post and firmly attached to the waiting platform. The threshing began with an oath from the driver to get the beast moving. To us, it was the only merry-go-round we knew, and we were given the opportunity to sit behind the driver in turn.”

I will write a bit more about Sydney Marangou-White when I come to Ouranoupoli at the end of this pilgrimage.

After our tour of the museum I sit in the evening cool of the monastery courtyard, relaxing in the deep silence of this space before retiring for the night at about 9.30.