Esenin, though not well-known in the west, is a very popular poet in Russia. Active in the early 20th century, he is the poet of the countryside and of nostalgia for the beauty of nature. Having achieved early success, he was lionised in St Petersburg society and literary circles. But success brought its own curse and a year after this poem was written, he hanged himself in a room at the Hotel Angleterre in the capital.

The poem seems to express the anguish or conflict he felt in the contrast between his current way of life in the big city and the beauty and simplicity of the countryside.

In Russian the poem has a particular rhythm and also rhymes, this musicality contributing to its distinctive melancholy tone and atmosphere. I have been trying to find a way of rendering this poem into English while maintaining both rhyme and rhythm, but all my attempts overcomplicate it and pack out the lines simply to make the metre work. Here’s one attempt at the first stanza:

The birch wood all in golden autumn dressed
Beguiles me into staying with its song,
And mournful cranes now flying home to rest
Show not a shred of pity for the throng.

The golden trees, speaking
In their own bright birch tongue, dissuaded me,
And sad cranes flying overhead
No longer feel sorry for anyone.

Who should they feel sorry for? For еvery wanderer in the world
Will pass by, call in and then leave home again.
The hemp field dreams of all those who have gone
While the broad moon shines over the blue pond.

Standing alone amid the bare plain,
While the wind carries the cranes off into the distance,
My head is full of thoughts of my happy youth,
But I don’t regret a thing about my past.

No regrets for the years wasted in vain,
No regrets for my soul’s lilac hue.
In the garden the fire of a red rowan burns,
But it can’t consume anyone.

The rowanberry clusters are not burnt,
The grass will not disappear from its yellowness.
As a tree silently drops its leaves,
I let fall sad words.

And if time, scattering them in the wind,
Rakes them all into into one useless heap,
Say this…that the golden trees
In their sweet tongue, dissuaded me.

It’s a little while since I did any translation and I was recently prompted to have a go at translating this poem from Russian as a little challenge posed here by the Russian & Czech Department at the University of Bristol.

Bunin uses deceptively simple language, but like all apparently simple things, they are really difficult to pull off. For me it also raises the old dilemma of the right way to translate something. Do you translate it as literally as possible, in which case it can sound dull and flat? Or do you attempt to to translate into a more poetic English idiom, in which case is it even the same poem?

Nabokov had a lifelong dream of writing a poem in Russian and translating it into English in such a way that it matched in both sounds and shades of meaning. It was a dream that he found impossible to achieve. So we should not be hard on ourselves if one of the greatest modern masters of English had to admit defeat. But Nabokov went further in the face of this failure: he completely retreated from the idea of a poetic translation. His translation of Eugene Onegin accompanying his massive commentary ( a true homage, full of fascinating background detail about the poem-in-verse) is an almighty clunker. It is a literal translation of the text with no attempt to convey spring and fizz of the original Russian. It’s truly awful.

Here’s my shot at the Bunin poem, falling somewhere between faithfully accurate and poetic:

The first nightingale
The liquid moon glows through the clouds.
An apple tree in curly white blossom.

A ripple of clouds, filmy and soft,
Blue against the moon.

In the chill of the bare, clear alleys of the garden
A nightingale starts up, attempting its song.

In the house, now dark, by an open window,
A young girl plaits her hair in the moonlight.

Sweet and fresh to her is the tale of spring,
Recounted to the world a thousand times.

Central Church (katholikon) of the Monastery of Osios Loukas

In my recent post about Sikelianos’s poem on renewing Greece after the second world war, I mentioned that I am hoping to do a post on the Byzantine Monastery of Osios Loukas in central Greece. Shortly after I wrote the post that I was introduced (again by my Greek tutor) to a poem that Sikelianos wrote that is set in the katholikon of Osios Loukas at Easter. So here’s my translation of it:

At the Monastery of Osios Loukas

At the monastery of Osios Loukas from among all
those women from Steiri who had gathered together
to decorate the Epitaphios, and all those
mourners who kept the vigil
until daybreak on Holy Saturday
which of them would have thought – so sweetly did they lament! –
that beneath the flowers, the faded enamel
of the dead Adonis was flesh
that suffered deeply.

Because the pain
amidst the roses and the Lamentations,
and the breaths of spring that came in
through the church door, gave hope
of the miracle of the resurrection
and Christ’s wounds on his hands and feet
seemed to them like anemones,
so many flowers covered him
and so intense and strong their scent!

But on that same Saturday evening,
when through the Holy Door a single candle
lit up all the others to the back of the church,
and from the Sanctuary the light spread out
like a wave to the outer door, everyone
shivered when they heard in the midst of
the acclamations of “Christ is Risen” an unexpected
voice yell: “Georgaina, it’s Vangelis!”

And there he was: the fine man from the village, Vangelis,
the admiration of the girls, Vangelis,
who everyone had thought lost
in the war; standing there
in the doorway of the church, with a wooden leg,
not crossing the threshold; and everyone,
with their candles in their hands,
was looking at him,
the dancer who shook the threshing floor
of Steiri, some looking at his face, some at his leg,
as if he was nailed to the doorstep,
and couldn’t come any further inside.

And still – may this verse be my witness,
this simple, true verse –
behind her, all those who had gathered there
since the evening of Holy Thursday
lamenting quietly, as if singing a lullaby,
the dead Adonis, hidden
amidst the flowers, now burst out singing
as her frightened scream died away
while in the pew where I was standing
a veil covered my eyes!…

It’s a bit of a sentimental poem for my taste, but I like it for its play on the idea of a triple resurrection. The poem is set at Easter at the Monastery of Osios Loukas, the most complete Byzantine monastery in Greece (outside of Athos). The women from the local village of Steiri have strewn with flowers the Epitaphios (a cloth depicting an icon of the dead Christ being mourned by the Mother of God and some of the disciples).

The poet equates the Epitaphios and the dead Christ with the myth of Adonis, according which Adonis was gored by a wild boar and died in the arms of his lover, Aphrodite. From the mingling of her tears and his blood, anemones sprang up. In Ancient Greece this event was celebrated in spring with a two day festival: on the first day women lamented his death by strewing flowers on his death bed. On the second day they celebrated his resurrection with joyful chants. 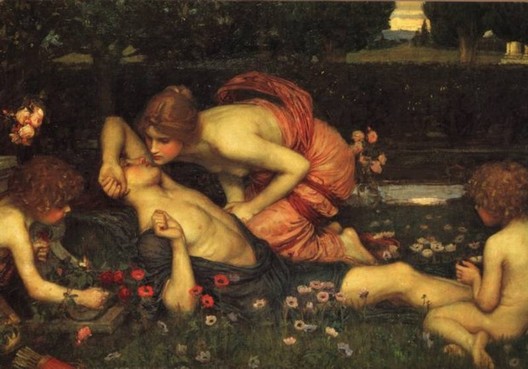 Very recently I came across this conflation of the two resurrections in an essay that Seferis wrote:

None of our traditions, Christian or pre-Christian, has truly died. Often when I go to the Good Friday service, it is difficult for me to decide whether the god who is being buried is Christ or Adonis. (Essays 2, 14: translated by Roderick Beaton)

To the idea of Christ’s and Adonis’s resurrection, the poet adds the idea of the soldier, believed to have been killed in the war, returning to his home village at the critical moment in the Easter celebrations. It’s a touching scene, but personally I would have cut the poet’s personal interventions and just let the story work its own magic.

I am looking for interesting poems about Agia Sofia in Constantinople and so far have drawn a bit of a blank. I have found a rather drab poem by Tyutchev and one focusing on its decay by Osip Mandelshtam. If you know of any better poems, I would love to hear about it!