Pushing my way back out of the cave that’s cool and dark after the fierceness of the afternoon Sicilian sun, I walk through a group of people spread across the width of the cave. As I pass them they start singing a tune that seems vaguely familiar at first, until it suddenly reveals itself as the Chorus of the Hebrew Slaves from Verdi’s Nabucco. Looking back I see a conductor in their midst. Some are singing the words, others (like me, drawn to them) humming along. It is totally unexpected, very moving and at the same time highly appropriate.

For I am in the Orecchio di Dionisio (Ear of Dionysus) in the Latomie at the Archaeological Park in Siracusa. From the outside it resembles the top of 2/3 of an ear and it has a curious
S-shaped structure that goes back about 60m, ending in a wall of sheer rock. Limestone was quarried here for buildings in Siracusa or alternatively it was used as a place for storing water. Whatever its original purpose it has a grim history.

In 415 BC during the Peloponnesian War, the Athenians sent an expedition against Sicily which was in league with the Spartans. It turned into a major defeat in 413 BC for the Athenians with the loss of 200 Greek ships and the capture of over 7,000 of their soldiers. The Orecchio di Dionisio is where these captured Athenians were kept in appalling conditions, without food or water. Most of them died after a few weeks and only an estimated 20 survived to make their way back to Athens to report to an incredulous population what had happened.

One can only imagine the torment of the Athenian prisoners in this prison and their longing for Greece. In Nabucco, the Hebrew Slaves lament for their lost homeland. So this impromptu performance by a random choir on a summer’s afternoon was a very fitting memorial to these events of so long ago.

Obliquely it also has a link to Euripides’ play ‘Eleni’ (first performed in 411BC) which I have blogged about here and also to Seferis’s poem of the same name. The defeat of the Athenian forces was a major blow to the morale of the city state and may have been one of the contemporary events that prompted the questioning of the purpose of war in Euripides’ play.

The Orecchio di Dionisio was given its name by Caravaggio after he was shown it in 1608 when visiting the island. The Dionisio in question was tyrant of Syracuse a few years after the defeat of the Athenian forces who allegedly imprisoned opponents here and was able to eavesdrop on their plans thanks to the space’s perfect acoustics. The best place to hear the focused sounds in the cave is from a gallery above the entrance which unfortunately is not accessible to visitors.

It’s in Siracusa that I encounter Caravaggio the painter for the first time, specifically his Burial of St Lucia. But that will have to wait for another post. 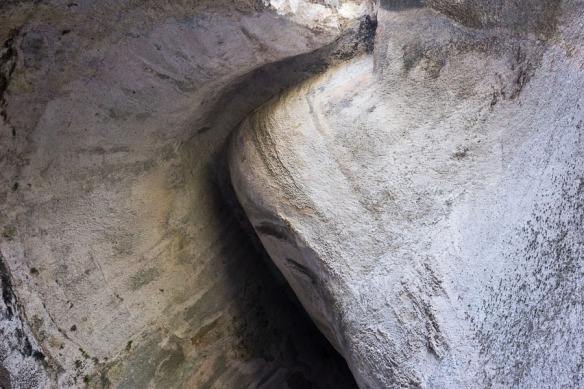