In one of my very first posts on this blog called Planting Orchards in Belarus I mentioned our friend, Vasily, and promised that I would write more about him in a separate post. Well, two years on, I thought it was time to follow through on that promise.

In that earlier post, I chronicled our relationship with Belarus and the eventual disillusion that set in for my wife and me when our sustainable livelihoods initiative there foundered. Well, at least our attempts to set up large-scale community orchards.

One positive thing that came out of that experience is that we met Vasily. So I want to write about him and how we got to know him, and then in couple of posts I’ll talk about what happened next.

In 2005 we were invited by the local authorities to work in the town of Narovlya which is right down in the south of Belarus, near the border with Ukraine. So my wife went there to discuss potential projects. He was introduced to her as someone who put all his efforts into doing something: “If Vasily grows potatoes, they’ll be the tastiest. If he grows plums, they’ll be the biggest.” He was young, bright-eyed and smart. Although he spoke no English, he mercifully spoke Russian slowly so he was easy to understand.

Vasily had trained as an electrician and at the time we first met him he worked in a school, in charge of facilities rather than on the teaching staff. Although he lived in a block of flats with his wife and two children, he had been brought up in the countryside and was a country boy at heart. He had decided that he wanted to do something practical outside of his work and similar to what he had done in the village where he had been born. So he bought a little wooden dacha on the edge of town with about 3 hectares of land, grew his own potatoes and cereal, even kept a pig or two. 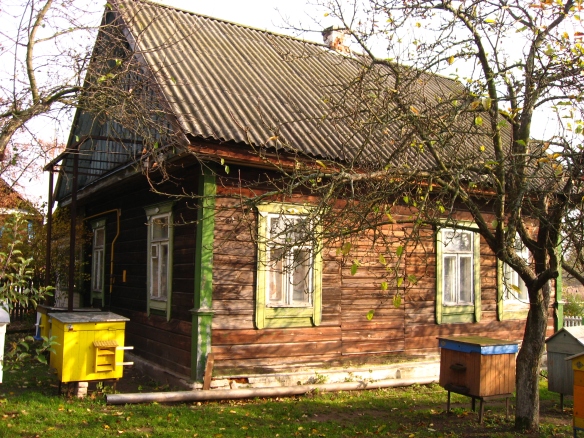 Vasily was 16 when the Chernobyl accident happened in 1986. He was born in a village about 12 kms south of Narovlya, closer to the border with Ukraine and Chernobyl. He told us: “At the time of the accident, people in the village were potato picking. Rumours went around that the Chernobyl nuclear power station had exploded. No one knew what that meant, and whether it was good or bad. A typical reaction was ‘If it’s blown up, then build it again.’ They didn’t know what radiation was.”

In the following days children still carried on going to school and then at the end of April the children were evacuated to camps. Over the next few weeks they were moved several times to ‘clean’ areas, but they still were not told what was happening. Two months later, he returned to his village and his parents were still living there.

It wasn’t until September/October that they were evacuated from the village and told to take only essentials as they would be coming back in 3 days time. So people just took essential papers, money and some clothes. In fact, they were never allowed back and soon after the village, with its houses and everyone’s possessions, was razed to the ground and buried in a pit. The village is now in part of the Chernobyl exclusion zone and people are still only allowed back one a year to visit family graves and lay flowers.

Vasily’s favourite hobby now was beekeeping which he had been doing now for about 10 years. After Chernobyl there had been many wild bees around and he first became interested in bees when he found a wild nest and took honey from it, even though he got stung. He did this a couple of times and when he went back a third time there was none left. From this simple beginning he taught himself beekeeping from books, as there was no one to help him do it.

Vasily is absolutely fascinated by bees and their behaviour and I learnt an enormous amount about them just from talking to him. When we first met him he had about 30 hives at his dacha.

The queen lives for 5 years, but the first 3 years are best for honey production. Each hive has about 30,000 bees and in Summer a bee lives for c.30 days before it dies of overwork and worn out wings. In its short lifetime a bee collects about one teaspoonful and to produce 1 kg of honey they need to visit 12,000 flowers. The hives have bee guards at the entrance to stop bees from other hives from stealing their honey and they can recognise them by their smell.

What surprises him about bees? “They are hardworking, they don’t get tired and they gather so much honey.”

Bees don’t sleep. In Winter they slow down and clump together in the hive for warmth – they don’t hibernate – and eat about 10kg of honey. Belarus is very cold in Winter with temperatures going down to -20 degrees C, so Vasily keeps the hive warm with padding inside the top of the hive itself.  He has a mixture of types of hive, some factory made, some bought secondhand and some he has made himself. The Belarusian hives are also made of thicker wood to keep the bees warm in the Winter.

Hive with winter padding in the cover

Vasily hardly needs to look at the hives in Winter, only occasionally tapping on the side of the hives and diagnosing from the resulting noise whether there is a problem with the hive. Normal hives make a buzzing noise which quickly dies down. Hives where there is a problem make a sort of continuous swishing noise. Lots of bees die at this time of year, so he needs to build up their strength after Winter. 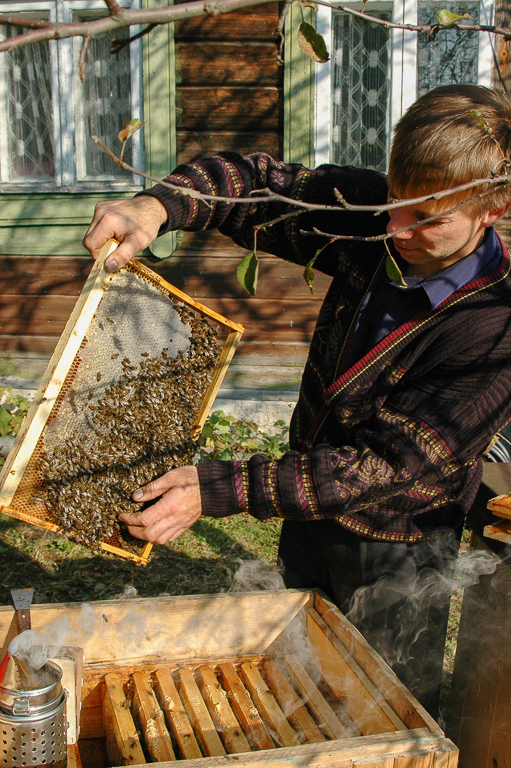 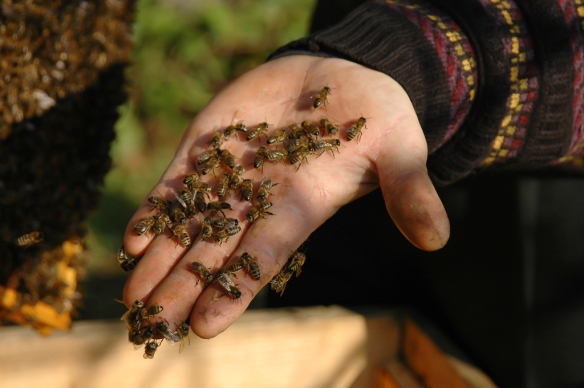 The bees stay in the hive from October through to the April. At the end of the Winter, the bees need to be cleaned, so if it’s still snowy he sprinkles sand on the ground for them to come out and fly around and do their ablutions. If he didn’t do this they would get snow-blind, fall to the ground and freeze to death.

One of his biggest problems is selling the honey. He does not have the time to sell at retail prices, so his only real option is to sell to a pan regional beekeeping association in Soligorsk, but the price they offer him fluctuates and they won’t always buy from him. He also produces wax but it would not be sufficiently profitable to sell it on its own – besides, he doesn’t produce enough of it.

One of the key things about Vasily is that he is really enterprising. He works long hours at the dacha in the evenings, even in the Winter, making bits of equipment and tools that he cannot buy or afford. I asked him once whether it doesn’t get too cold to work at the dacha in Winter and he told me: “It’s fine – until it gets down to minus 10 degrees and then I go home.”

During one of our early visits he showed us an old railway wagon that he wanted to turn into a mobile apiary, so that he could take hives round to fields flowering at different times of year. It struck me, as I looked at the rusting hulk, that this was a bit of a pipe dream, but then again I didn’t know Vasily. 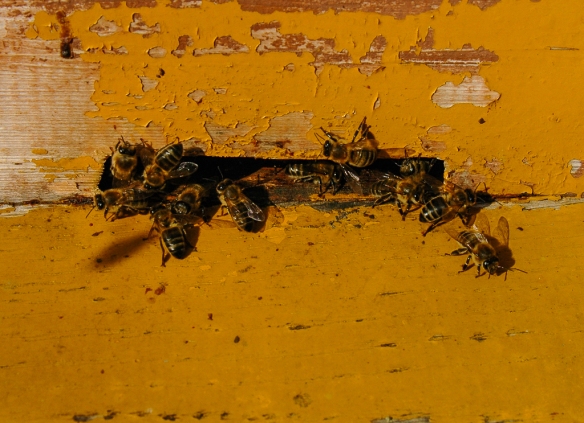