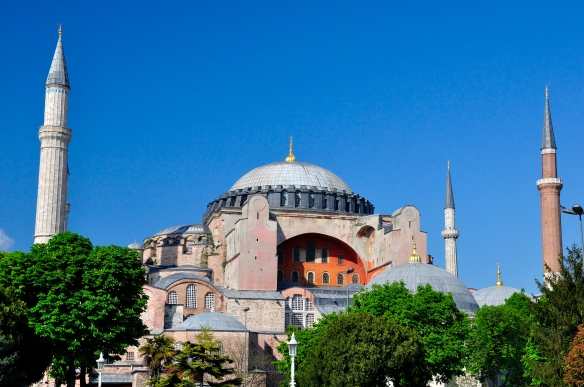 A ramp takes you from the ground floor of Haghia Sophia to the west gallery on the upper floor. I find this part of the building very atmospheric and it’s easy to imagine the conquerors of Constantinople in 1453 swarming up the ramp to explore the upper reaches of the church. 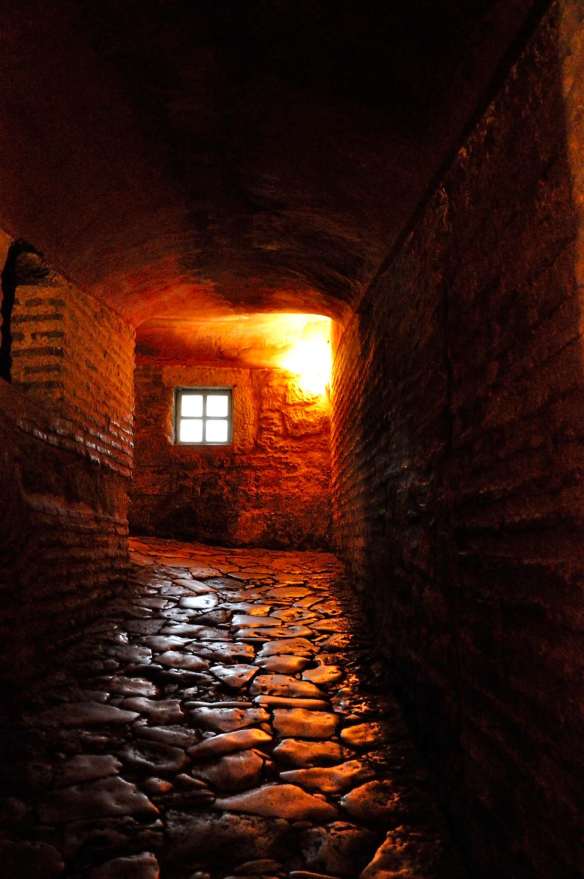 The galleries were for the use of the Empress and women of the court: the west gallery is spacious and light after the dim light of the lower floor and ramp. 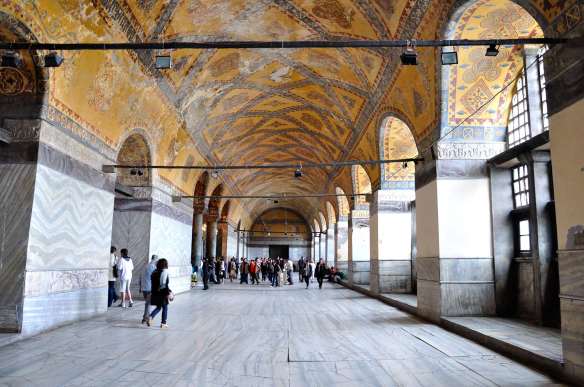 Looking down from the gallery into the body of the church I am reminded of the view from the upper floor of St Mark’s in Venice, one of the most Byzantine of western churches. From up here it is easier to get a sense of the scale of the church and the great space of the nave. 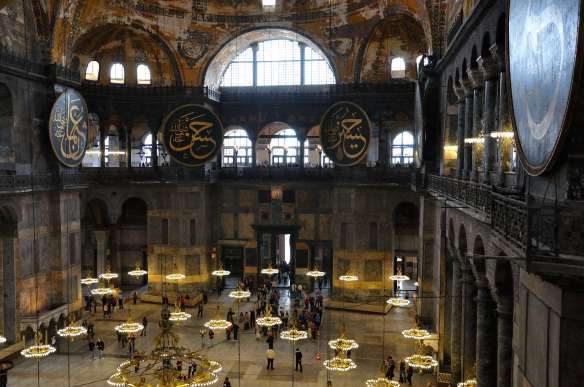 The huge wooden roundels were only added in 1821 by the Fossati brothers and display in Arabic calligraphy the names of Allah, Mohammed, the first four caliphs and the prophet’s martyred grandsons, Hasan and Hussein. 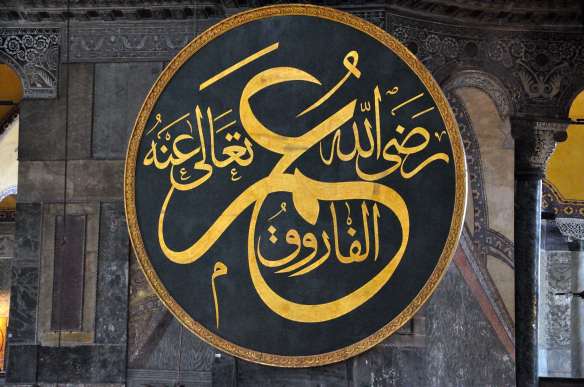 Originally the church had a silver iconostasis which would have stood in front of the apse. It is sad to think that it was in this great space in 1054 that Cardinal Humbert excommunicated the Emperor Michael I Cerularius and was in turn excommunicated. This marked the beginning of the Great Schism between the eastern and western wings of the churches that has lasted to this day. 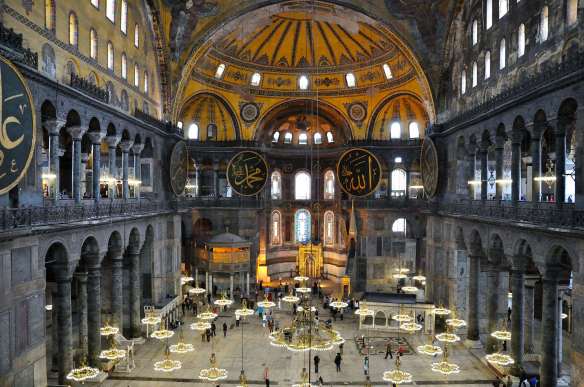 Islamic windows in the apse: 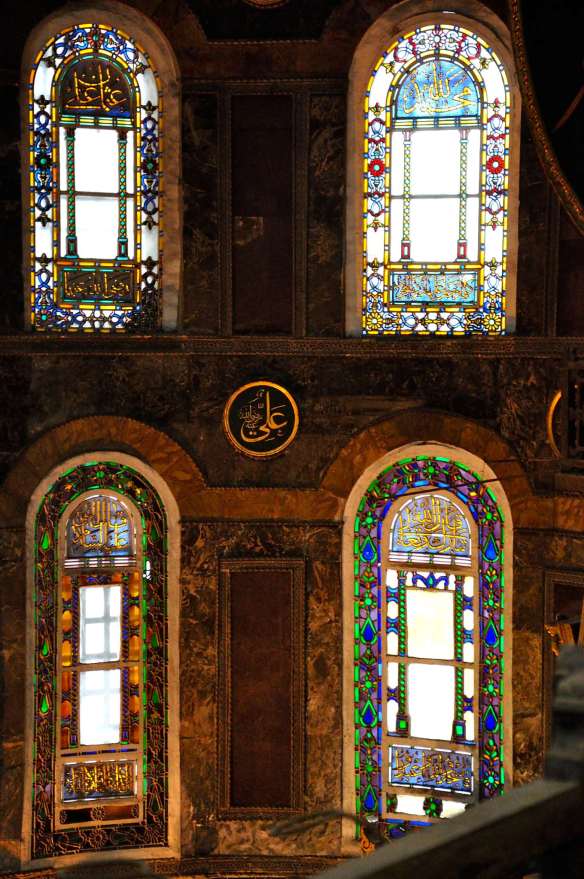 You also get a closer view up here of the extraordinary mosaic of the Mother of God in the apse. This mosaic was inaugurated in 867 by Patriarch Photius and Emperors Michael III and Basil I. The gold background of the mosaic dates back to the sixth century. 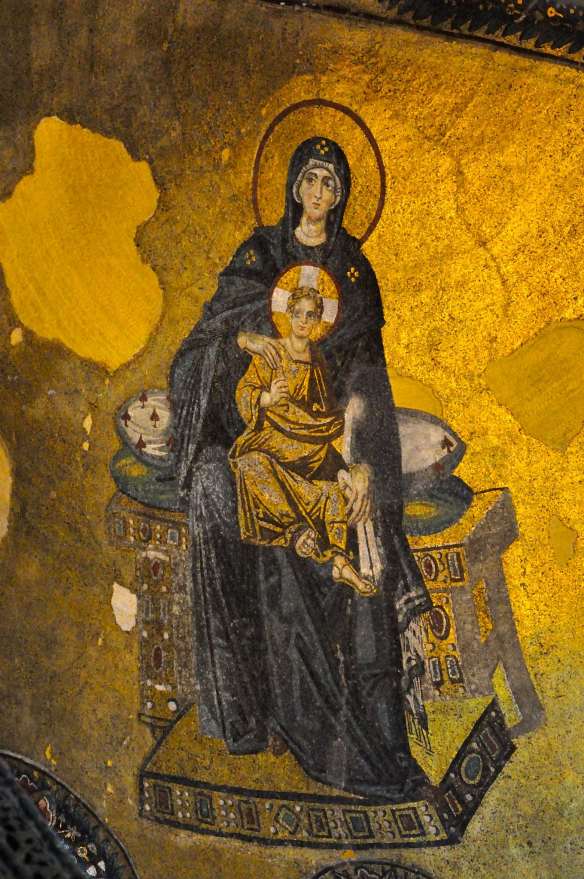 The entrance to the south gallery through a marble doorway called the Gates of Heaven and Hell, though exactly what function they served is not known. 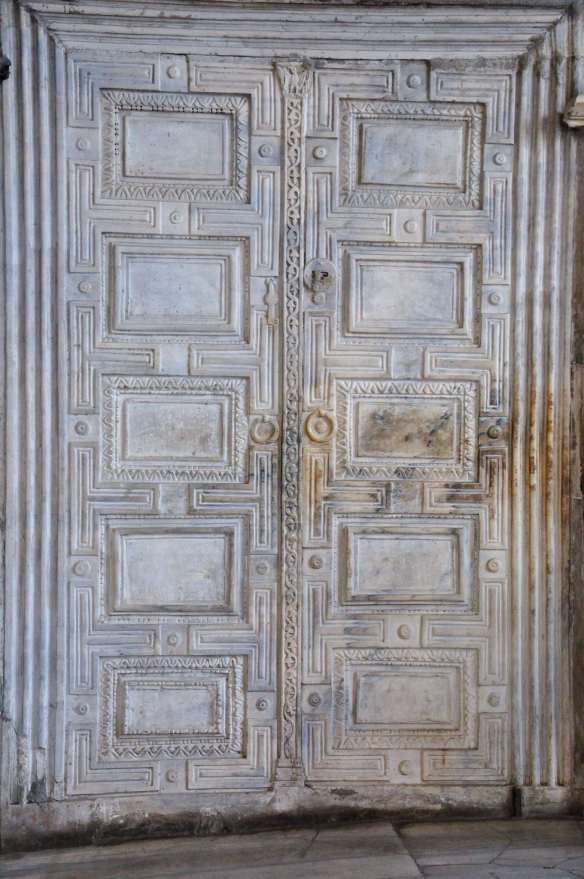 On the north side in the space between the ground floor arches and the clerestory are mosaics of saints, including St John Chrysostom, Archbishop of Constantinople and Ignatios Theoforos, Patriarch of Constantinople. I find it surprising that these apparently survived intact – perhaps they have been restored or perhaps they were sufficiently out of sight not to be an offence to the Ottomans at worship. 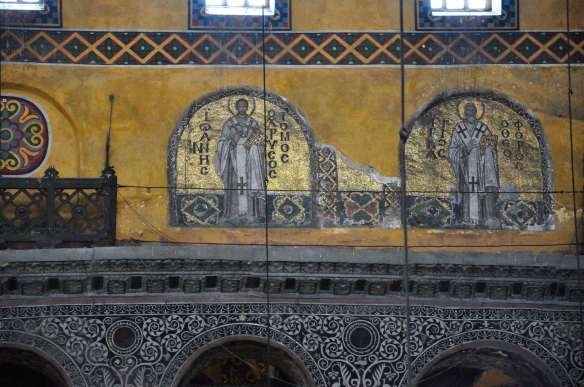 One curious feature in the north gallery is a piece of Viking rune graffiti from the ninth century scratched into the balustrade (apologies in advance for the quality of the photograph). It would be interesting to know what the graffiti says and I wonder what these visitors from distant Scandinavia (possibly part of the emperor’s Varangian guard) made of Haghia Sophia and the religious services they witnessed here. 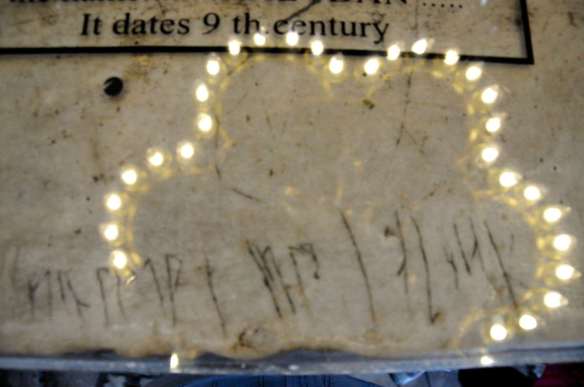 After the fall of Constantinople, the Ottomans covered over many of the mosaics in Haghia Sophia with plaster. Just past the Gates of Heaven and Hell you come across the first of three mosaics, the Deesis (Entreaty) mosaic depicting the Theotokos and John the Forerunner (John the Baptist) interceding with a powerful Christ Pantocrator (Ruler of the Universe) for mercy for humanity on the Day of Judgement. So much of this mosaic has been lost that it is fortunate that these three beautifully realised figures survive, though to my eye the colours have been over-restored. The mosaic dates from 1267 and probably marks the end of the Frankish occupation of Constantinople after the Fourth Crusade and its return to use as an Orthodox church after being used as a Roman Catholic cathedral. 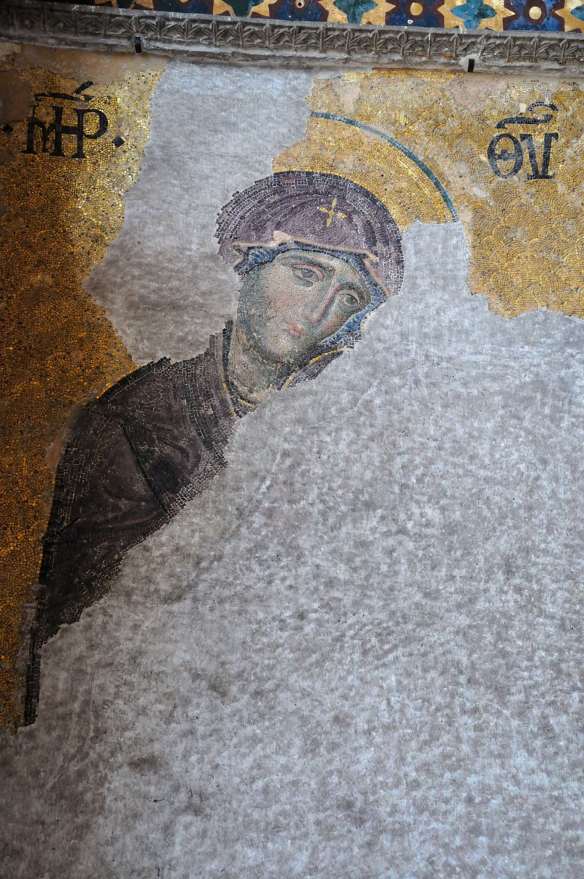 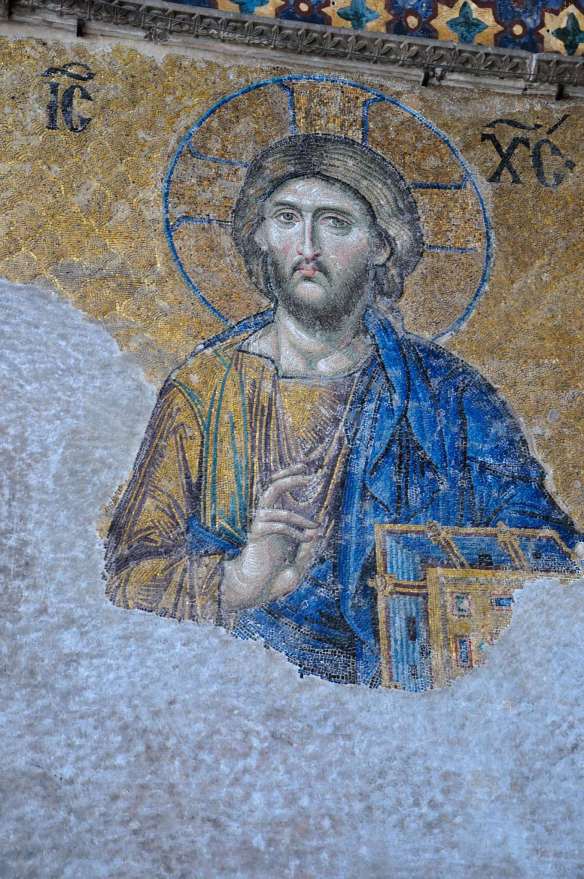 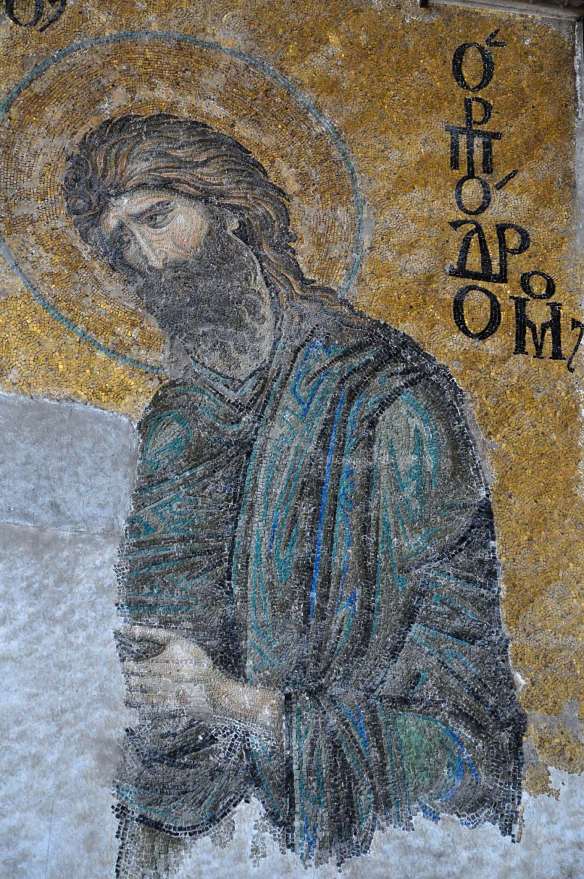 The lower part of the mosaic is badly damaged, but a picture to the side gives an idea of what the original mosaic would have looked like. 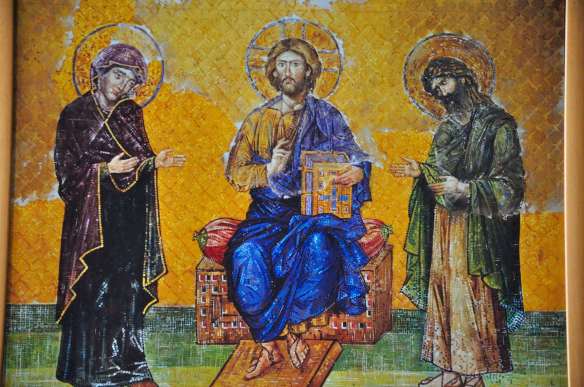 Opposite this wonderful mosaic is a marker on the floor indicating the location of the tomb of Enrico Dandolo, the Doge of Venice who led the Fourth Crusade in 1204 that was responsible for the sacking of Byzantium. 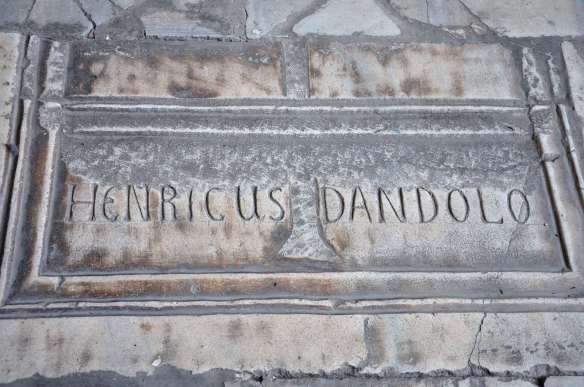 From an open window there is suddenly a clear view across the domes of the church towards the Blue Mosque. 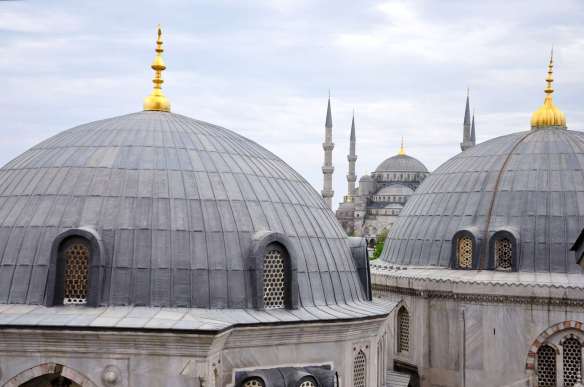 At the end of the south gallery are two further mosaics. The first shows the Mother of God holding Christ, with Emperor John II Comnenus on the left and Empress Irene on the right: 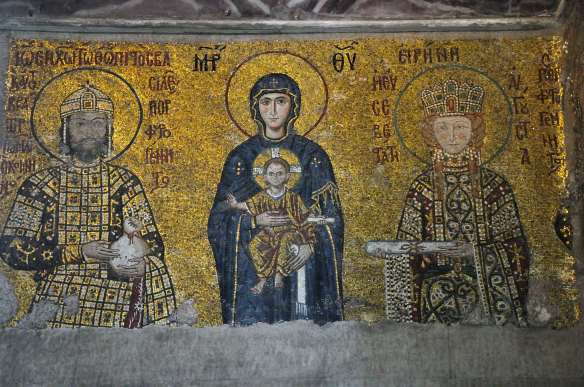 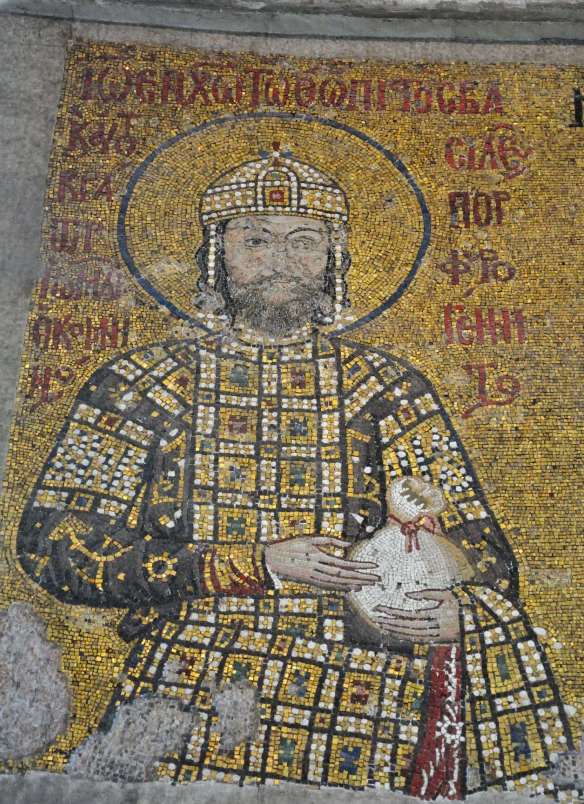 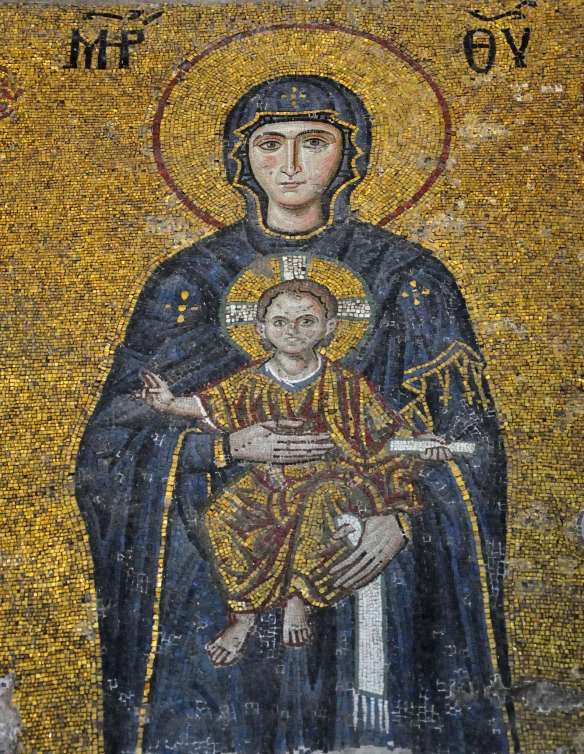 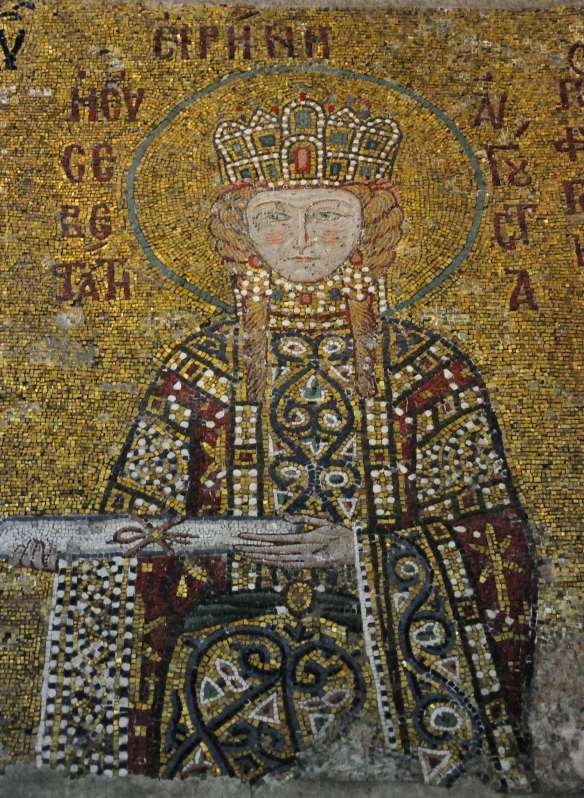 On an adjacent column, as if extending the mosaic round the corner, is their son, Alexius Comnenus: 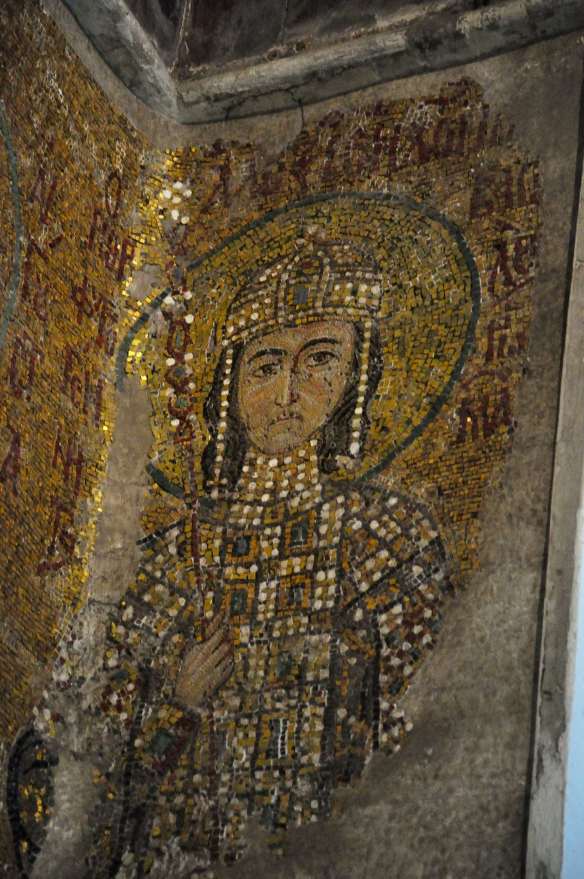 The second is a mosaic of Christ with Emperor Constantine IX Monomachos and Empress Zoe: 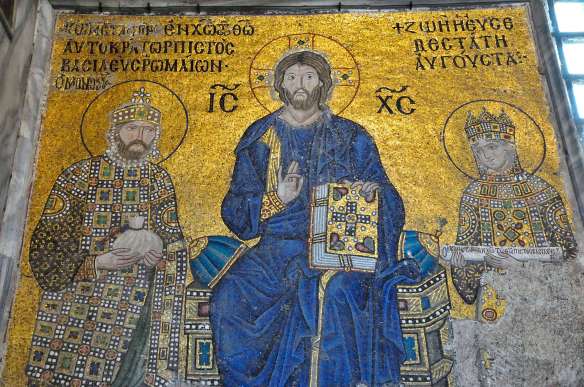 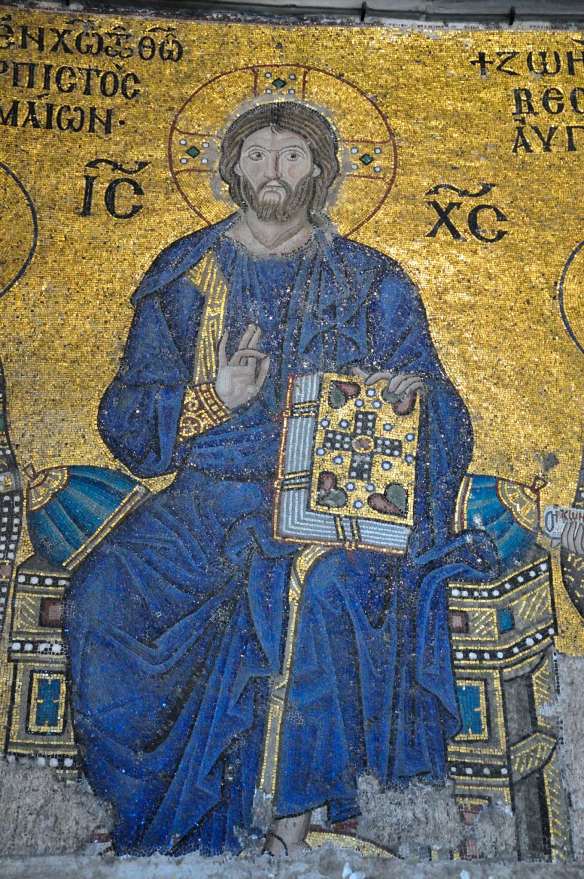 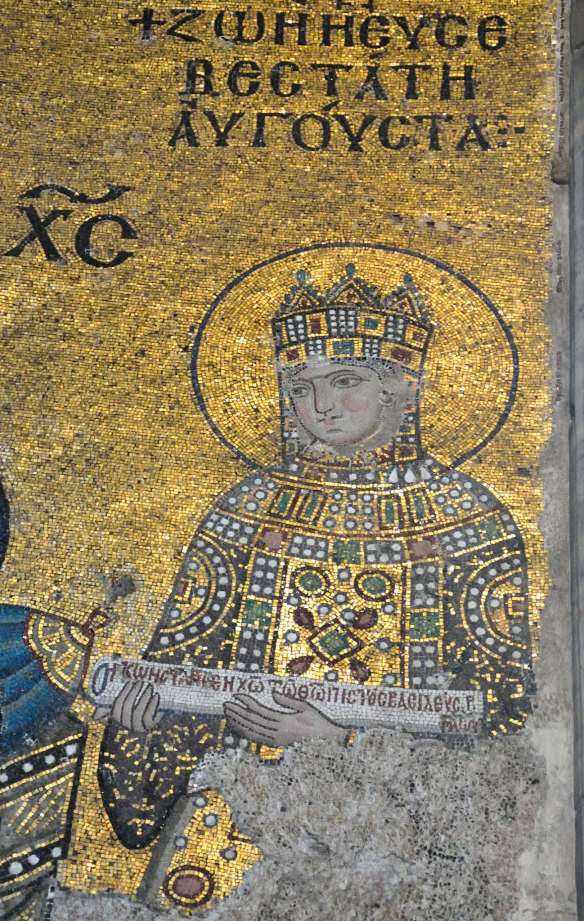 In the baptistery there is a huge stone basin with steps for total immersion baptism and several interesting pottery containers, including this one; 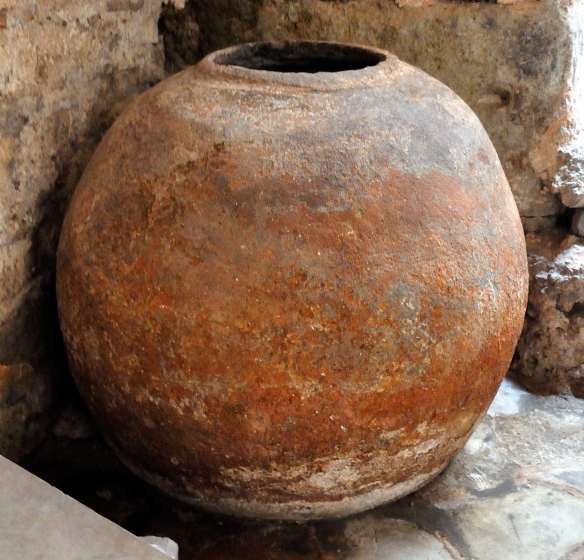 Leaving the church through south-west exit and just before the Vestibule of the Warriors,  where the emperor’s guard waited for him when he went to services, there is a mosaic (probably tenth century) which was only discovered in the middle on the nineteenth century. On the left Emperor Justinian I presents a model of Haghia Sophia to the Theotokos and Christ and on the right Emperor Constantine presents a model of Constantinople.

My favourite mosaic is the Deesis and particularly the powerful image of Christ. 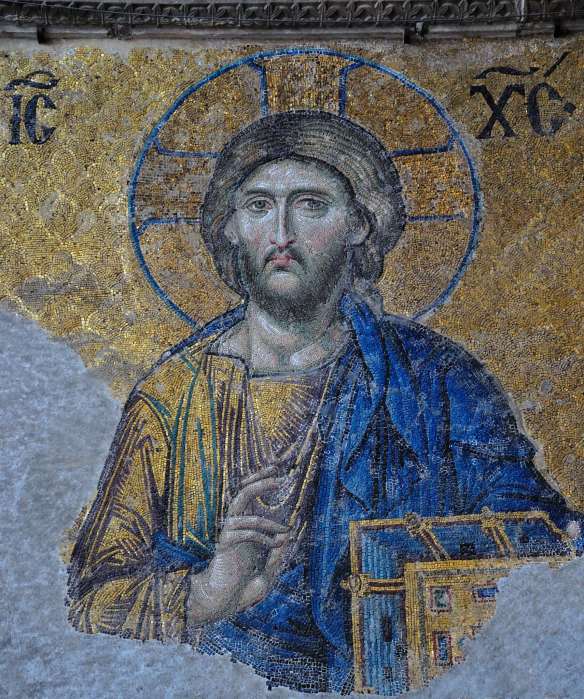 The asymmetry of the eyes reminds me of the sixth century panel icon on Christ Pantocrator at St Catherine’s Monastery on Mount Sinai.